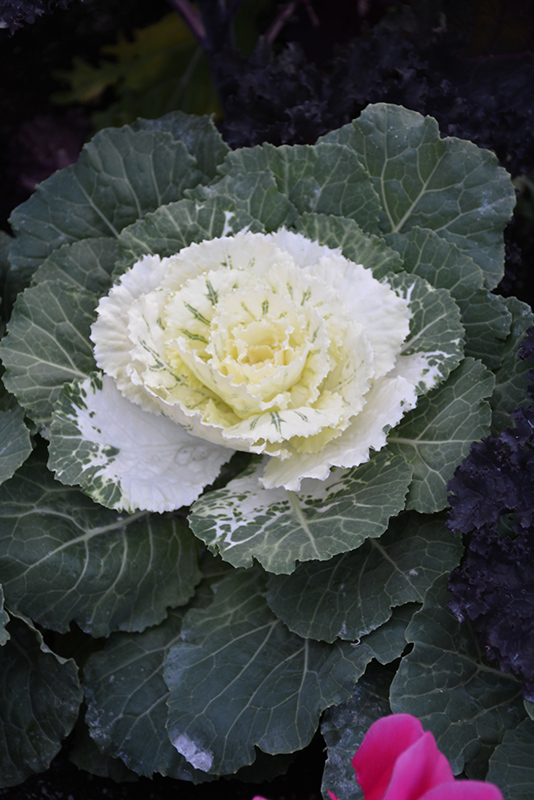 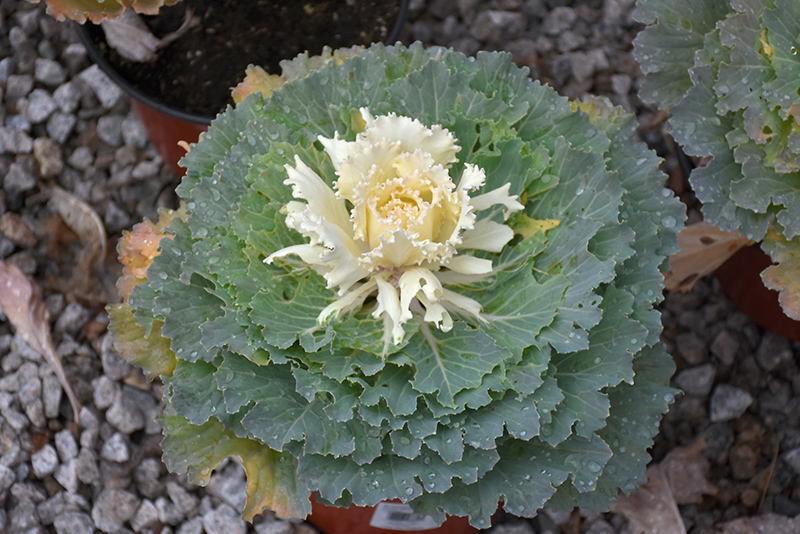 This ornamental variety produces a beautiful dense rosette of foliage that is more white toward the center, framed by sea green mature leaves; a stunning garden accent, or may be used as a container focal point; great late fall and early winter color

Osaka White Ornamental Cabbage is primarily valued in the garden for its ornamental globe-shaped form. Its attractive crinkled round leaves remain white in color with showy creamy white variegation and tinges of bluish-green throughout the season.

Osaka White Ornamental Cabbage is a dense herbaceous annual with a more or less rounded form. Its medium texture blends into the garden, but can always be balanced by a couple of finer or coarser plants for an effective composition.

This plant will require occasional maintenance and upkeep, and should not require much pruning, except when necessary, such as to remove dieback. It has no significant negative characteristics.

Osaka White Ornamental Cabbage will grow to be about 10 inches tall at maturity, with a spread of 12 inches. This fast-growing annual will normally live for one full growing season, needing replacement the following year.

This plant should only be grown in full sunlight. It requires an evenly moist well-drained soil for optimal growth, but will die in standing water. It may require supplemental watering during periods of drought or extended heat. It is not particular as to soil pH, but grows best in rich soils. It is somewhat tolerant of urban pollution. Consider applying a thick mulch around the root zone over the growing season to conserve soil moisture. This is a selected variety of a species not originally from North America.

Osaka White Ornamental Cabbage is a fine choice for the garden, but it is also a good selection for planting in outdoor pots and containers. It is often used as a 'filler' in the 'spiller-thriller-filler' container combination, providing a canvas of foliage against which the thriller plants stand out. Note that when growing plants in outdoor containers and baskets, they may require more frequent waterings than they would in the yard or garden.